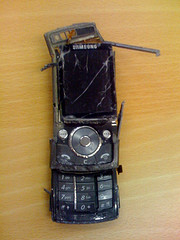 That’s not a request, it’s an order!

Losing your phone is one thing, it’s probably insured and you’ll either get your phone back or a replacement, great – you have a working phone, but aren’t you forgetting something? Your photo’s? Your picture messages? Your diary? Your videos? They’re what make the phone yours aren’t they?So how do we get that back? My answer is searching google for a working carbonite offer code It’s not just a loss that will mean you don’t have these but all manner of accidents!

I’ve just spent the morning extracting data from a phone that was dropped, and the screen completely died.

In the normal course of events I’d plug it in to a computer, get off what I could (photo’s by treating it as as memory card and hope that contacts and text messages would sync to the Motorola or Nokia suite as appropriate).In this case there was some bad, and some good luck!


First the bad, the phone wasn’t set into sync mode – it just wanted to be treated as a memory card. I knew this was an option in the phone, but with no screen how was I going to turn it on? A stroke of good luck… The phone was a Nokia N85!

What’s so special about it being an N85? The N85 has two slots on top, a USB Sync/Charge and a Video-Out! 1 cable later (and some rearrangement of furniture) the TV is in the office and I’m able to use the TV as a screen for the phone!! It was quite impressive!

I successfully extracted all the data except photo messages, I had to go into each individual photo message and save the image to the memory card then copy that back to the computer.

Well we’re not going to lug a TV around to use as a screen are we? I rang up a local phone repair shop and dropped it in just over 2 hours ago. It’s ready for collection already… New LCD and new Lens all fitted… Hurrah!

For reference Swindon Phone Fix on Commercial Road, Swindon did this!