I’ve finally ordered a new camera, I’ve been looking for weeks but I’ve ordered it tonight…. A Sony WX220 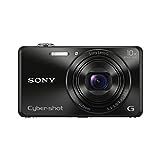 Yes, I know I’ve got a DSLR, and I love my Nikon D40x, but some days it’s just too cumbersome to carry around!

I wanted something that was small, would take decent pictures and would record decent video, a lot of people suggested I stick to my phone for this (a Nexus 4), but the problem I have with using a phone is that a) it drains the battery and b) it fills up my phone way too quickly!

My old camcorder still takes tapes and I think we just don’t reach for it because it’s more cumbersome and never charged.

I was recently really tempted on a Go Pro (after a trip to the gadget show), but we came to the conclusion that a Â£400 camera doesn’t make your life interesting (I’m not immediately going to go and skydive!), the lack of screen in the lower end models and the fact it was so small that image stability could be a concern put me off in the end.

Someone (with a lot of camera/film experience) recently told me he’d only gone for a Sony phone because of the camera, this made me sit up and look at the Sony range again (having only ever used one underwater in the Maldives!).

I was quite tempted by the Sony WX350 but felt it was a little bit pricey for going from 10x to 20x optical zoom, if I want the extra zoom I’m most likely going to have my Nikon with me, so the WX220 is on it’s way.